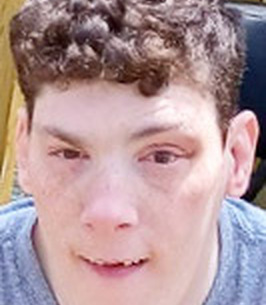 Christopher Lee Stroup, 39, of Altoona, walked and then jumped into the open and waiting arms of his Lord and Savior on Friday, Sept. 16, 2022, after a beautiful day at Glendale Lake with his friend, Tom.

He was preceded in death by his mother, Penny Wallace.

Surviving are his father, Buddy Stroup of Tyrone; and his brother, Travis Stroup of Altoona. Chris will also be remembered by his caring and fun roommate, Derek Singer; a really cool friend, Hailey Killinger; and many others who loved, cared and supported him in a person-centered manner.

Christopher attended Hollidaysburg Senior High School and graduated in 2004. He was a member and player in the Batter’s Up Baseball League in Altoona and a player in the Miracle League baseball program as well. Chris also appreciated the magical wonder of horses and was involved with Dreams Go On.

He spent most of his days enjoying an abundant life with his friends at the Skills Adult Training Building in Altoona and cruising the surrounding area he called home, here in wonderful Blair County. Chris enjoyed the beauty of relaxing in nature, animals (the bigger the better), loud music, his tablet to watch Mario and Bells and Whistles.

Despite many struggles and physical challenges that very few of us could ever comprehend, Chris brought much joy and happiness to those who truly knew him. He was a man of few words, but said a lot through his never give up attitude and zest for a fulfilling life. Throughout his time on Earth, he was supported by many kind and caring people from Crossroads, Skills, North Star Support Services and Southern Alleghenies Management Group. These people gave countless hours and much of themselves supporting Chris to ensure he was able to live his life to the fullest extent possible. His thanks and gratitude for your individual support and love are forever extended.

Friends will be received from 1 until the 2 p.m. memorial service Tuesday, Oct. 18, 2022, at The Good Funeral Home Inc., 108 Alto-Reste Park, Altoona. Interment at Alto-Reste Park will occur at a later date.

Chris would be honored by any contributions made on his behalf to Crossroads, The Skills Foundation, Central PA Humane Society or Batter’s Up Baseball League.