To share your memory on the wall of Donald Williams, sign in using one of the following options:

Donald L. Williams, 92, of Johnstown, formerly of Altoona, passed away Thursday at his residence, following an extended illness. He was the son of the late John K. and Dorothy... Read More
Donald L. Williams

Donald L. Williams, 92, of Johnstown, formerly of Altoona, passed away Thursday at his residence, following an extended illness. He was the son of the late John K. and Dorothy H. (Bowers) Williams. He married Evelyn V. (Simer), who passed away on Aug. 21, 2005.

Donald was an avid auto mechanic, Pittsburgh Steelers fan, and enjoyed travelling and spending time with his family. He attended Altoona Bible Church and also The Church of Jesus Christ of Latter-day Saints, Johnstown. He was employed at U.S. Sports shoe factory as a mechanic. He served in the U.S. Air Force during the Korean War.

All services will be privately held at the convenience of his family. Interment will take place in Alto Reste Park. Arrangements are with The Good Funeral Home Inc.

To send flowers to the family or plant a tree in memory of Donald L. Williams, please visit our Heartfelt Sympathies Store.

Receive notifications about information and event scheduling for Donald

We encourage you to share your most beloved memories of Donald here, so that the family and other loved ones can always see it. You can upload cherished photographs, or share your favorite stories, and can even comment on those shared by others.

Posted Mar 09, 2021 at 04:06pm
My Sympathies to your family. I remember your Mom and Dad attending the Altoona Ward of the Church of Jesus Christ of Latter Day Saints. Your dad always had the most sales of sandwiches when we had fundraisers for the building of the chapel.
Comment Share
Share via:
BC

Posted Mar 02, 2021 at 05:51pm
Uncle Donald,
I'll never forget your tenacity, You lived your life as you wanted to, and without fear. Whatever you wanted, you worked hard
for it, and you succeeded at what you tried. You faced troubles head on. In all my memories of the Williams' famiiy, you are there. You were right, you raised a wonderful family.
I knew I would miss you.........
Betty Lou
Betty Lou

Posted Feb 28, 2021 at 09:29pm
During my youthful years it was almost yearly that Willie and Evelyn came to visit us in Illinois.It was a time that looked forward to by all concerned. Willie brought with them his work tools and would repair our sewing machine. It meant so much to visit with all my nieces and nephews and my dear sister and ofcourse Willie. We stayed up late listening to his stories of many things as he was a wise and adventurous man. Many fond memories of he will I always cherish. I know that he now rest in that place he earned during his lifetime here with family and friends. We all have fond memories of him. I do. Goodby my friend. .......Rich Simer and family
Comment Share
Share via: 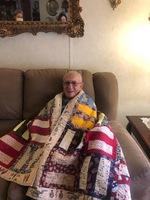