To share your memory on the wall of Steven Daughenbaugh, sign in using one of the following options:

Steven "Shorty" Richard Daughenbaugh, 73, Altoona; passed away Saturday at UPMC Altoona. He was born in Altoona, son of the late Harry Vincent and Bernadine Loraine Heller.

Shorty was a 1966 graduate of Altoona Area High School. After graduation, he went on to serve in the United States Army from 1966-68.

He was employed at J C Orr Lumber Company until his retirement.

A memorial service will be held at a later date. Arrangements are by The Good Funeral Home Inc., Alto-Reste Park.

To send flowers to the family or plant a tree in memory of Steven Richard "Shorty" Daughenbaugh, please visit our Heartfelt Sympathies Store.

Receive notifications about information and event scheduling for Steven

There are no events scheduled. You can still show your support by sending flowers directly to the family, or planting a memorial tree in memory of Steven Richard "Shorty" Daughenbaugh.
Visit the Heartfelt Sympathies Store

We encourage you to share your most beloved memories of Steven here, so that the family and other loved ones can always see it. You can upload cherished photographs, or share your favorite stories, and can even comment on those shared by others. 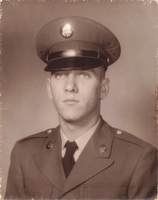